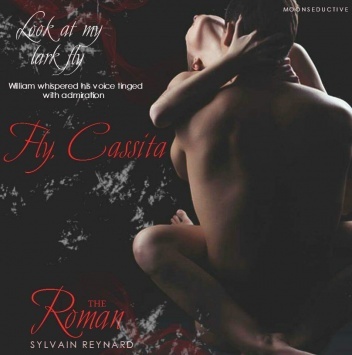 The Roman – Review by: Maru Bosch
December 8th, 2016
Book #4 of The Florentine Series by Sylvain Reynard

The Roman is the last book of Sylvain Reynard’s Florentine Series, and for me as for the rest of the fans of this thrilling saga, it is hard to let go of these two incredible characters go (for the moment, I hope).

SR has developed a wonderful and romantic story about two lovers (William and Raven) that are from two different worlds, both looking for redemption and love. When their worlds collide, they know that is impossible to trust their feelings because there are so many things at risk.

You´ll be delighted for the brilliant narrative from the very beginning in The Prince (The Raven and The Shadow complete the Series). What you may think as a simple detail in the first book, is totally well intertwined with what I considered the icing on the cake of the Series, “The Roman”.

If you read the previous books you´re well aware that William is pushing his limits, he knows what he´d do for his Florence. But if he wants to save Raven, he will need to challenge all that he knows. And if he knows something by heart, is that traitors are waiting in every corner of his beloved city.

In this last installment, you will find beautifully written scenes and definitely the most intense of all the Series, in which you can perceive how SR is constantly developing the feelings of the protagonists throughout difficult circumstances. It´s a profound story, it´s meaningful, it’s mysterious…Some parts robbed me of a laugh, and some other parts a tear (…or two).

In my humble opinion, in this last book of The Florentine Series, SR kept his style and did not let the fantasy make him commit excesses. As I said before, I consider this book the best of all. I see it as his ultimate journey too, because he has written a retrospective work of his own beliefs.

Sylvain Reynard is one of the greatest storytellers… Take his hand and allow him to take you on this last but epic trip through Florence and never give up hope.