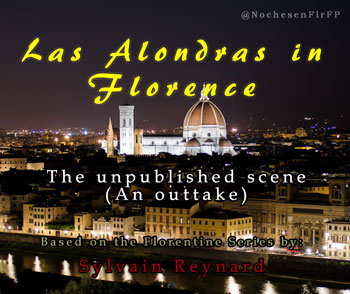 The following scene is a translation of a special collaboration between the podcasters of Noches en Florencia Fan Podcast (Maru, MJ & Lily) and Sylvain Reynard for their special show, Los Juegos Florentinos on July 30, 2016.

La Alondras in Florence
The unpublished scene (An outtake)

La Alondras decided to travel to Italy with the hope of getting to know the Prince of the underworld of Florence.

They stayed at the Gallery Hotel Art where The Snarky Narrator was waiting for them, who would serve as their tourist guide. They exchanged hugs with him and told him how happy they were to meet with him. In addition, they confessed that they were in a secret mission: to find William York.

He replied to them – “I can take you to him, but not too close.” Just imagining their encounter with William York, Maru forgot how to breathe, but had her camera and autograph book ready (where she also kept and cherished Jamie Dornan’s), Lily was dumbstruck and in need of a beverage to soothe her nerves (but when it passed, she thought she could ask for an Aoibhe souvenir to take to her husband, perhaps a lock of her red hair…) and MJ thought on what she could do to touch the Prince’s biceps, just to corroborate whether he was as strong as Snarky described them. Parenthetically speaking, that was just an excuse, because one of her major weaknesses were biceps and the other was the V, but she was also very realistic, and understood that the latter was very difficult to achieve. Therefore, it would be enough for her to touch his biceps. Meanwhile, SR   gazed at them with curiosity and thought they were very beautiful.

Pati, Laura, Betty, Perling, María, Tamir, Karo and the girls from Trilogía Gabriel left ahead of time because they wanted to take a tour around the city before we all met for dinner. Meanwhile Laura, Jazziel, Miriam, Meli, Alex, Nina, Evelyn, Kata, Diana, Cinthya, Estefanía and Las Alondras decided to rest in their rooms until dinner time. We were all invited to dine at Alle Murate, but the group that was taking the tour didn’t arrive by then. Did something happen to them? We knew that the city was not safe at night …

After about 30 minutes later, we all breathed a sigh of relief when the girls finally arrived at the restaurant. They were all of a sweet vintage, and we knew very well what that meant. Lily, Maru and MJ gathered together and agreed that it would be a miracle if the restaurant was not already surrounded by vampires when we departed for our tour around the city, but decided not to say anything to the rest of the Alondras. Betty shared that the reason for the delay was that Karito thought she saw Professor Emerson and Julia walking by the restaurant on their way to the Piazza Signoria.

The Snarky Narrator made a toast for all the beautiful Alondras. We ate a multi course meal of pasta and veal and drank an excellent Brunello di Montalcino, while we listened to them talking about the beauty of the city, its mysticism and their desire to meet the Prince and Sexy Ibarra. Tomorrow they would go site seeing, but today, if everything went well, they would meet William York. Las Alondras were excited, while SR just thought Reckless. No one realized that there was a figure watching them and listening intently to their conversation from a hiding place inside the restaurant.

On their way toward the Palazzo Medici Riccardi (following Raven’s example when she went looking for William York and expecting to be as lucky as her), the mysterious figure appeared abruptly!  He asked them politely, what did they want, to what Maru replied if he could marry her, Lily immediately pulled out her iPhone and requested to take a selfie with him, and MJ simply asked if she could touch his biceps. The Prince’s reaction was a slow, wide smile. When the rest of Las Alondras were able to recover from their shock, they began to ask him for selfies and autographs (kind of like what happens to a movie star). The Prince couldn’t understand what was happening, so he told them to stop taking photographs and warned them that Florence was a dangerous place after dark. Suddenly another figure appeared from the darkness, whom we recognized immediately: Sexy Ibarra. Finally! Definitively, this was our lucky day. When the Prince saw him, he told him to watch over Las Alondras carefully, or he would be punished.

Truthfully, we all wanted to dance with Sexy Ibarra, so we invited him to a club that its façade looked like the Roman Coliseum and was called “The Roman.” We asked William to join us as well, and he said “Not tonight”. He never stopped looking with wonder at Las Alondras for he had never known a group of women as enthusiastic and fearless as them. None could be controlled mentally, since they all had a very strong spirit, so he decided to permit them one photograph. William finally understood that Las Alondras were temporary visitors to Florence and would be returning home soon.

After his meeting with the group, William decided to take Raven dancing in a small and secluded place near the villa.