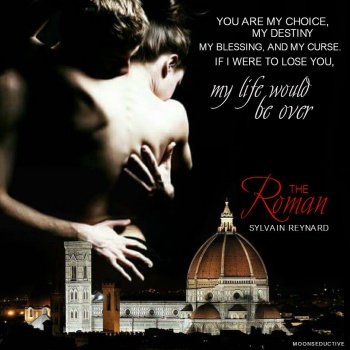 The Roman – Review by: Lily Torres
December 7th, 2016
Book #4 of the Florentine Series by Sylvain Reynard

The much-awaited conclusion to Raven and William’s Story arrived and what an arrival it is!

We could say it’s the end of two love stories, the powerful story of William and Raven’s love affair and the end of The Prince’s love story with his city of Florence.

We have witnessed throughout the series the intensity and passion with which William defends and protects what he loves. In The Roman, he doesn’t disappoint. We see his protective side but we also see so much more. He will go to the end of the Earth for Florence and for the love of his life, Raven.

Raven stays true to what we have admired about her since we first met her in The Raven. She is fierce, protective, merciful and won’t shy away from anything. This is why we fell in love with this character, because despite of everything she has been through in her life, her inner beauty has never diminished.  That’s why, Raven is our favorite heroin and because of her we created our campaign #YoSoyRaven, that focuses on the beauty that comes from within us. We will miss Raven very much.
(You can read more about #YoSoyRaven on a special Blog Post that we wrote for SR on his blog.)

In addition to these two amazing protagonists, Sylvain Reynard adds a great cast of old and new characters that in a web of intrigue, action, sensuality and spirituality brings this story to an end. His narrative style is pure poetry, which makes for a highly pleasurable read.

The end is bittersweet. I didn’t want to say goodbye to these characters. I still feel that perhaps there is a “See you later”. Only SR has the answer to that. I will certainly miss Florence, the Prince and his black hair and green eyed Alondra that stole our hearts and made us look at the world with a little more hope.

Five stars for The Roman and the rest of the Florentine Series (The Prince, The Raven and The Shadow)

For more information about The Roman directly from Sylvain Reynard please read his blog post from Dec 6th, 2016.